Polysyndeton is used to achieve a variety of effects in poetry and literature. The overuse of conjunctions in close succession helps achieve rhythm, mainly by introducing continuation and slowing it...

Polysyndeton is used to achieve a variety of effects in poetry and literature. The overuse of conjunctions in close succession helps achieve rhythm, mainly by introducing continuation and slowing it. This rhetoric figure of speech can convey solemnity or even exhibit a childlike spirit. Having a Greek etymology, which means 'bound together', a sentence employing a 'polysyndetic device' uses coordinating conjunctions like 'and', 'or', 'but', or 'nor' to link the words, phrases or clauses. It adds cadence to the sentence or a series of sentences. Usually, in a grammatically correct sentence, the word or phrase after the 'and' is given most importance. However, polysyndeton gives equal importance to every element in the list. Usually used in short stories, novels and speeches, the tempo and endless continuity create an overwhelming outcome. Literatures, both classic and modern, greatly employ this rhetoric technique to captivate a reader's interest. It helps in holding the passage together as one, hence keeping the reader threaded to the idea. Polysyndetons are used extensively in religious scripts too. Such torrential sentences are sure to make a person want to read more, not only for the morals they hold, but for the rhythm and tempo they create within a person. To feel its effect to the fullest, look through the examples below. 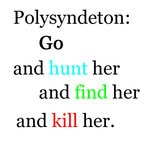 We have ships and men and money and stores.

He ran and jumped and laughed for joy.

We lived and laughed and loved and left.

They read and studied and wrote and drilled. I laughed and played and talked and flunked.

Polysyndeton In Novels And Dramatic Pieces

"If there be cords, or knives,
Poison, or fire, or suffocating streams,
I'll not endure it." - From 'Othello' by William Shakespeare

I said, "Who killed him?" and he said, "I don't know who killed him but he's dead all right," and it was dark and there was water standing in the street and no lights and windows broke and boats all up in the town and trees blown down and everything all blown and I got a skiff and went out and found my boat where I had her inside Mango Key and she was all right only she was full of water. - From 'After The Storm' by Ernest Hemingway

"Let the white folks have their money and power and segregation and sarcasm and big houses and schools and lawns like carpets, and books, and mostly--mostly--let them have their whiteness." - From 'I Know Why the Caged Bird Sings', an autobiography by Maya Angelou

This is not just another figure of speech. The power, force, intensity and vehemence this device infuses into any writer's, or speaker's, work can be commendable. The rapid effect while keeping the audience hooked on to the edge is what an asyndeton statement does. Evolved from the Greek word asyndetos; asyndetism means unconnected or not bound together. The conjunctions connecting a series of words, phrases or clauses in this technique are omitted and instead, only commas are used. This continuous flow of thought speeds up the rhythm of the passage and a single idea tends to be more memorable. If you are familiar with the polysyndetons, a figure of speech which encourages overuse of conjunctions, then asyndetons are the complete opposite. An elimination of conjunctions enhances a reader's thought process, giving a natural sense of spontaneity to the overall piece. The examples below will enlighten you with the effect of this rhetorical device.

He provided her education, allowance, dignity.

I could have gone to war, I didn't.

He tried to betray you, to cheat you, to deceive you.

We met, we got engaged, we married. 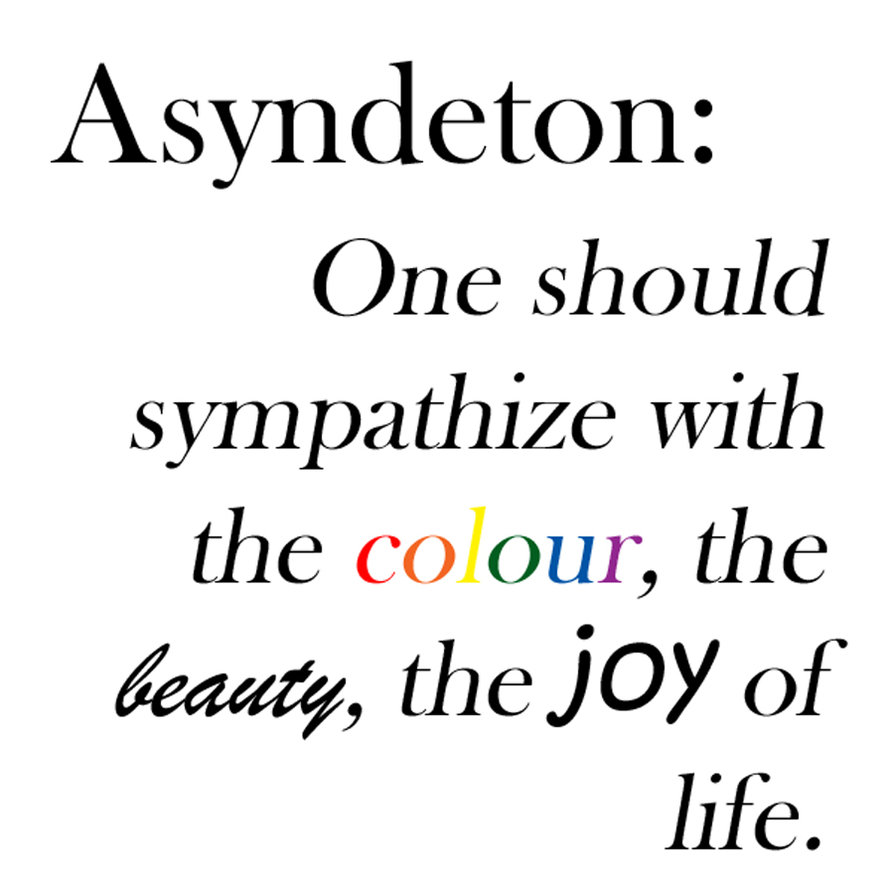 Surely, you've come across literary works or movies where an idea is being described and suddenly it transforms into something less significant. By definition, anticlimax terms/phrases are figures of speech in which statements or ideas descend according to their importance. To put it in simpler words, a serial arrangement of phrases, words or clauses in an order of higher to lower priority. It is usually exciting to find sentences with an anticlimax but they have a negative effect and are a let-down. This occurs when the audience expects a climax that is more entertaining or thrilling. Even in spoken language, you might have often encountered people who speak in a meaningless manner that is contrary to their conclusion and buildup. It leaves you wondering whether the words were intentional or happened by mistake! Sometimes, anticlimax can be used for a satirical or a jocular purpose.

Examples Of Anti-Climax
In literature, anticlimax features a sudden transformation from an important idea to a comparatively less significant or a trivial observation or expression. If in case, movies have a very good and impressive beginning and later crash into unexpected and a disappointing ending, then it surely deserves a mention in the anticlimax examples!

'The Rape of the Lock' by Alexander Pope, liberally uses anticlimax in the following verses:
"Here thou, great Anna, whom three realms obey,
Dost sometimes counsel take, and sometimes tea."

"The holy passion of Friendship is of so sweet and steady and loyal and enduring a nature that it will last through a whole lifetime, if not asked to lend money." - Mark Twain.

"Not only is there no God, but try getting a plumber on weekends." - Woody Allen.

"And as I'm sinkin'
The last thing that I think
Is, did I pay my rent?"
(Jim O'Rourke, Ghost Ship in a Storm)

Example 1
"All that most maddens and torments; all that stirs up the lees of things; all truth with malice in it; all that cracks the sinews and cakes the brain; all the subtle demonisms of life and thought; all evil, to crazy Ahab, were visibly personified and made practically assailable in Moby Dick." - An extract from 'Moby Dick'

Romeo: If I profane with my unworthiest hand
This holy shrine, the gentle fine is this:
My lips, two blushing pilgrims, ready stand
To smooth that rough touch with a tender kiss.

Juliet: Good pilgrim, you do wrong your hand too much,
Which mannerly devotion shows in this;
For saints have hands that pilgrims' hands do touch,
And palm to palm is holy palmers' kiss. - -Lines borrowed from 'Romeo and Juliet' by William Shakespeare

Let a man acknowledge his obligations to himself, his family, his country, and his God.

And now abideth faith, hope, charity, these three; but the greatest of these is charity.

When you step out into the jungle, there are three things that you need to be aware of, the time of day, your whereabouts and wild animals.

He is uncomplicated, upright, strict, austere and inspirational.

What a piece of work this is! How holy in reason, how inestimable in faculties! In action, how much like an angel!

It is absolutely not right to arrest or detain an innocent man. It is a bigger crime to whip him for a crime he had nothing to do with. All of this is tolerable, but to sentence him to his death when he has wronged not a soul is something that cannot be excused. Such is the state of justice, an innocent man paying ever so dearly for the crime of another.

As the bowler walked up to the batsman, he stared him in the eye and challenged him to hit him out of the park. The batsman accepted the challenge. With excitement in his stride, the bowler then rushed in to hurl the ball at the batsman. The hawkeyed batter was more than prepared. With a quick and sudden twist of his bat, the ball was sent soaring to the stands.

On her way to work, she met with an accident. This was how it all unfolded. As she began to cross a very street close to where she worked, she was knocked down by a speeding motorist, post the fall, a bus went over her limbs, just missing her abdomen. She managed to survive the mishap, retaining just about an inch of her life.

Litotes is defined as 'an ironical understatement in which affirmative is expressed by the negation of the opposite'. In this figure of speech, the usages are intentional, ironical and provide emphasis to the words. This is mainly done through double negatives. To put it in simple terms, in litotes, instead of saying that something is attractive, you say that it is not unattractive. In literary circles, plenty of poets as well as writers have used this concept to convey strange and vivid images. It changes the thought process and thereby beautifies and adorns the literary works. Most of the literary works describe litotes in such a way that the words described are not false, but do not come near a complete description of the action in question. Rather, they are presented in a passive tone and demand more careful attention from the reader. Even figurative language use litotes to convey messages in a clear and impressive manner.

Regularly Used Examples Of litotes
Following are some of the commonly used litotes:

They aren't the happiest couple around.

He's not the ugliest fellow around!

She's not the brightest girl in the class.

The food is not bad.

It is no ordinary city.

That sword was not useless to the warrior now.

He was not unfamiliar with the works of Dickens.

She is not as young as she was.

You are not wrong.

Einstein is not a bad mathematician.

Heat waves are not rare in the summer.

Аntithesis - a figure of speech which contrasts ideas, words and concepts in one sentence. However, contrasting words like bittersweet, dark-light, etc. aren't antithesis. To be an antithesis, a sentence should have contradicting words positioned in a balanced way in a phrase or a clause. Antithesis examples can be commonly spotted in novels, poems and quotes. In fact, you can find people often using quotes like 'to err is human, to forgive is divine' to inculcate good acts in others, which is a very valid example of antithesis. Antithesis is normally used to give out the exact opposite meaning of something. Opposites are not always for arguing or conflicting with each other; it is just the way you use to describe two different moods. Read on to get a clear idea on antithesis.

Antithesis Examples In Poetry and Quotes

Unlike short-sighted, egocentric humans, God "sees with equal eye" the fall of a hero and a sparrow, the destruction of an atom or a solar system - Alexander Pope.

Give every man thy ear, but few thy voice.

Many are called, but few are chosen.

Integrity without knowledge is weak and useless, and knowledge without integrity is dangerous and dreadful. - Samuel Johnson

Hee for God only, shee for God in him. - by John Milton. 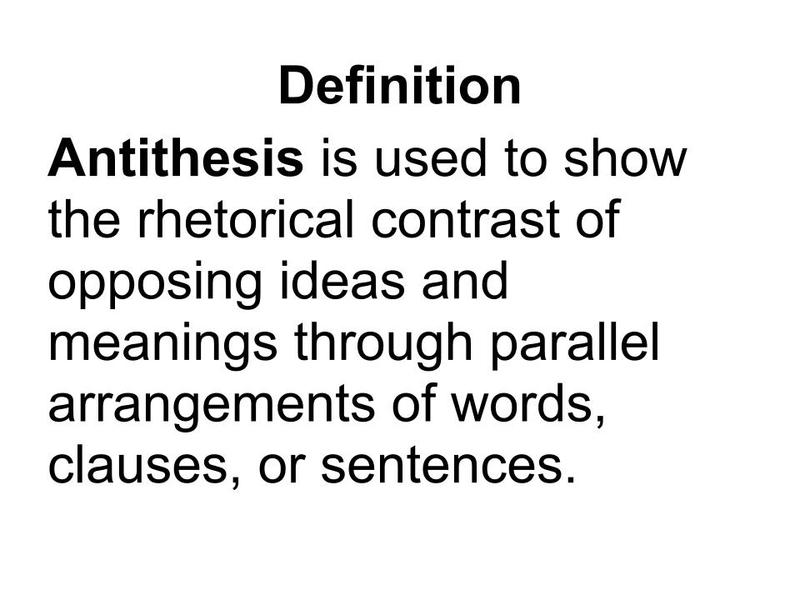