There is a simple table, which in short can explain you what is the similie, metaphor and personification means:   Also, I found a poetry analysis, where you can clearly see the using of metaphor...

There is a simple table, which in short can explain you what is the similie, metaphor and personification means: 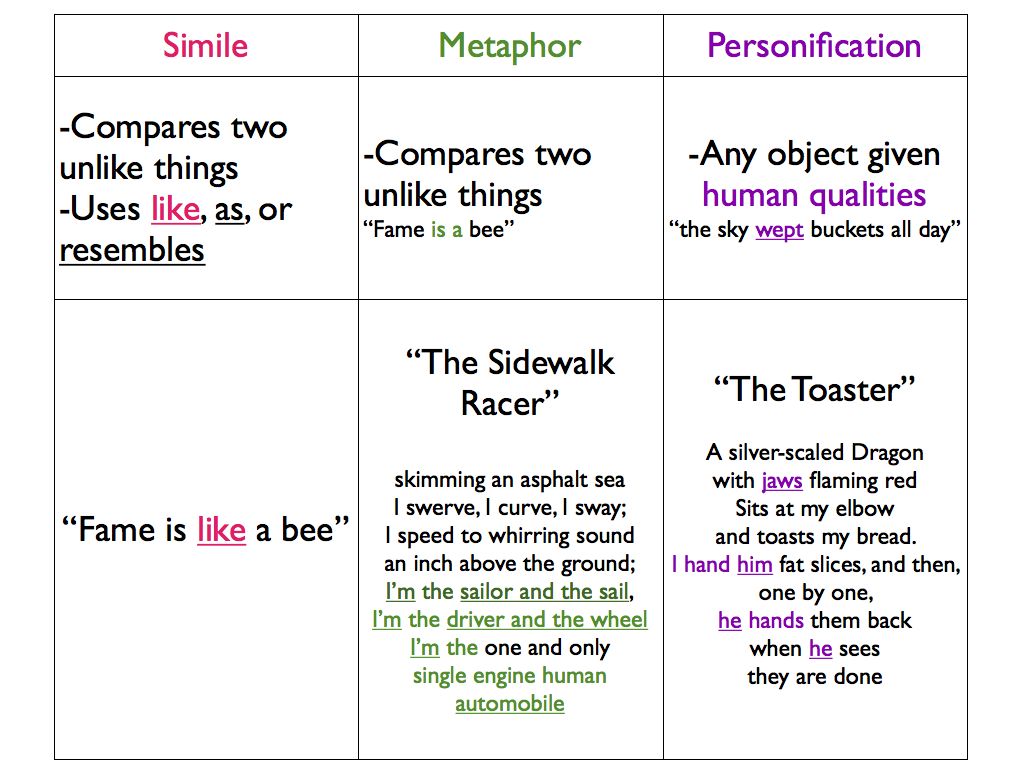 Let's take a look at how metaphor, simile, metonymy, and personification show up in the following poem:

In her room at the prow of the house
Where light breaks and the windows are tossed with linden,
My daughter is writing a story.

I pause in the stairwell, hearing
From her shut door a commotion of typewriter-keys
Like a chain hauled over a gunwale.

Young as she is, the stuff
Of her life is a great cargo, and some of it heavy:
I wish her a lucky passage.

But now it is she who pauses,
As if to reject my thought and its easy figure.
A stillness greatens, in which

The whole house seems to be thinking,
And then she is at it again with a bunched clamor
Of strokes, and again is silent.

I remember the dazed starling
Which was trapped in that very room, two years ago;
How we stole in, lifted a sash

And retreated, not to affright it;
And how for a helpless hour, through the crack of the door,
We watched the sleek, wild, dark

And iridescent creature
Batter against the brilliance, drop like a glove
To the hard floor, or the desk-top,

And wait then, humped and bloody,
For the wits to try it again; and how are spirits
Rose when, suddenly sure,

It lifted off from a chair-back,
Beating a smooth course for the right window
And clearing the sill of the world.

It is always a matter, my darling,
Of life or death, as I had forgotten. I wish
What I wished you before, but harder.

Extended metaphors are those comparisons that are sustained throughout a literary work. For example:

"Brilliance" is a detail of a window that is substituted for the window itself. It forces the reader to recognize the reflective sun on the window's glass, making the outside all the more alluring.