A pun is a phrase that deliberately exploits confusion between similar-soundingwords for humorous or rhetorical... 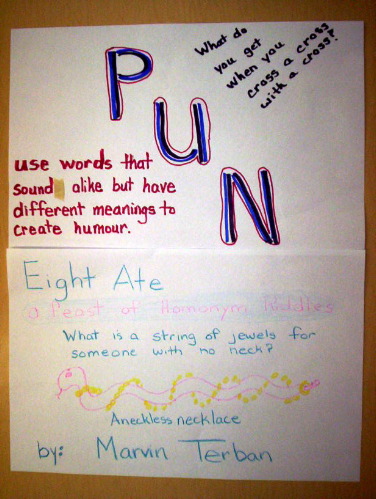 Punning, 'the humorous use of words to suggest different meanings', has been a feature of language at least since the time of Aristotle, who approved of them in some kinds of writing. Some famous historical examples include the description by Pope Gregory I (6th century) of English slaves as Non Angli, sed angeli('not Angles, but angels') and, from a much later date (1843) the reputed message of Sir Charles Napier to the British War Office reporting his conquest of the Indian province of Sind with the single Latin word Peccavi ('I have sinned'). About 3,000 puns occur in the works of Shakespeare, among them Mercutio's dying words in Romeo and Juliet (iii.i.98; modernized spelling): Ask for me tomorrow, and you shall find me a grave man. An intentionally dreadful pun can be found in a mock epitaph of Byron, dated 1807, for John Adams, a carrier of Southwell, who died of drunkenness: For the liquor he drank, being too much for one, He could not carry off,—so he's now carri-on. In modern usage, puns occur frequently in casual conversation and are much loved by writers of newspaper headlines.

Zeugma is a figure of speech describing the joining of two or more parts of a sentence with a single common verb or noun. A zeugma employs both ellipsis, the omission of words which are easily understood, and parallelism, the balance of several words or phrases. The result is a series of similar phrases joined or yoked together by a common and implied noun or verb. In a modern sense, the zeugma has been classified as a synonym for syllepsis, a particular kind of zeugma, although there is a clear distinction between the two in classical treatises written on the subject. Henry Peacham praises the “delight of the ear” in the use of the zeugma in rhetoric, but stresses to avoid “too many clauses.” The zeugma is categorized according to the location and part of speech of the governing word.

-"Kill the boys and the luggage!"
(Fluellen in William Shakespeare's Henry V)

Irony isthe use of words to convey a meaning that is the opposite of itsliteral meaning: the irony of her reply, “How nice!” when I said I hadto work all weekend.

In Romeo and Juliet, Juliet speaks from her balcony, not realizing Romeo can hear her.

A malapropism is an act of misusing or the habitual misuse of similar sounding words, especially with humorous results. An example is Yogi Berra's statement: "Texas has a lot of electrical votes,"[1] rather than "electoral votes".

An instance of mis-speech is called a malapropism when:

All of these examples are from Sheridan's play The Rivals.