I want to show what I've learned about metaphor, simile, personification and metonomy. I hope you will enjoy it. METAPHOR The term "metaphor" as the etymology of the word reveals, means...

I want to show what I've learned about metaphor, simile, personification and metonomy. I hope you will enjoy it.

The term "metaphor" as the etymology of the word reveals, means transference of some quality from one object to another. The idea that metaphor is based on similarity or affirnity of two corresponding objects or notions. A metaphor states that A is B Metaphors can be classified according to their degree of unexpectedness. Thus metaphors which are absolutely unexpected, i.e. are quite unpredictable, are called genuine metaphors. Those which are commonly used in speech and therefore are sometimes even fixed in dictionaries as expressive means of language are trite metaphors, or dead metaphors. 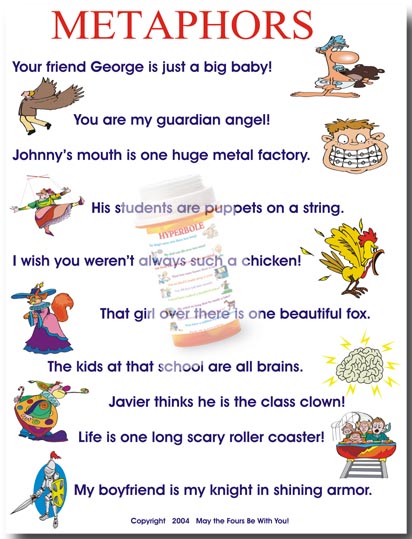 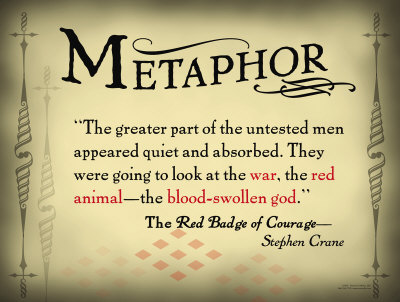 Metaphors are used to help us understand the unknown, because we use what we know in comparison with something we don't know to get a better understanding of the unknown. It makes speech, phrases more vivid.

Simile - the imaginative comparison of two unlike objects belonging to different classes. A simile states that A is like/as B.

Simile man shows us what we use in simile)) 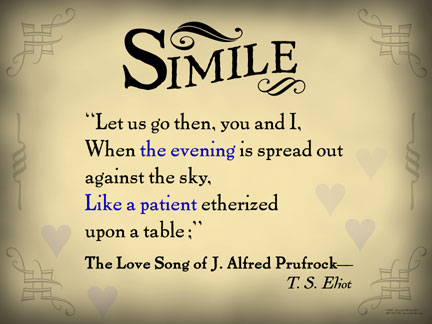 Sematically similies can be as a metaphor:

- genuine, based on some fresh analogy between two things.

- trite, the original figurative meaning of which has been forgotten due to the overuse ( blind as a bat, as sick as a dog)

Structurally similes can be:

-disgiused ( to resemble, to seem, to look like, to appear) 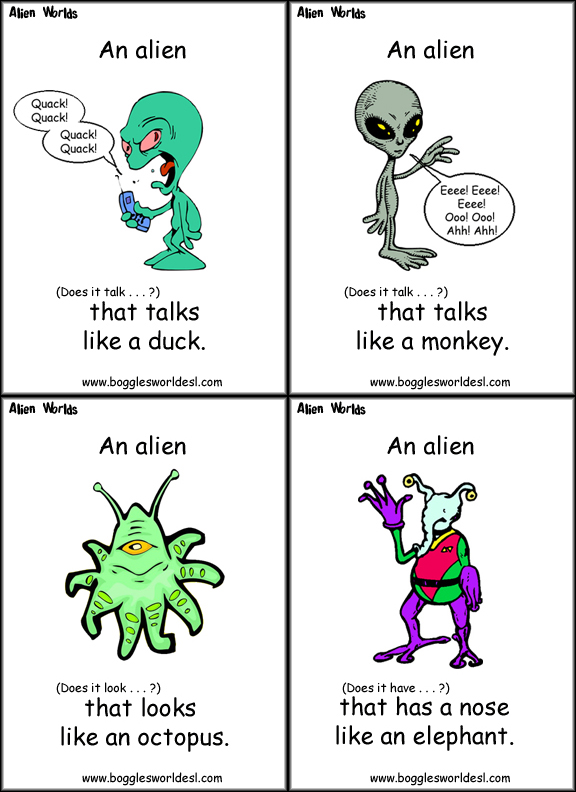 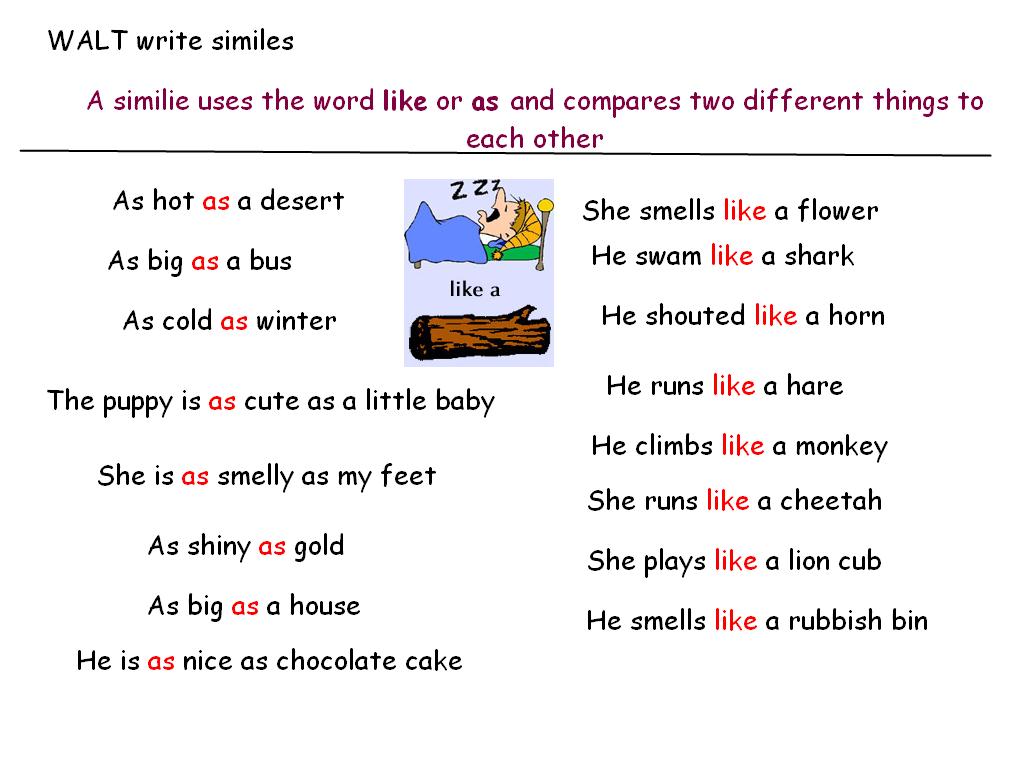 Observations on the Differences Between Similes and Metaphors

Simile: My father grumbles like a bear in the mornings.

A metaphor also compares two things, but it does not use the word like or as.

Metaphor: My father is a bear in the mornings. 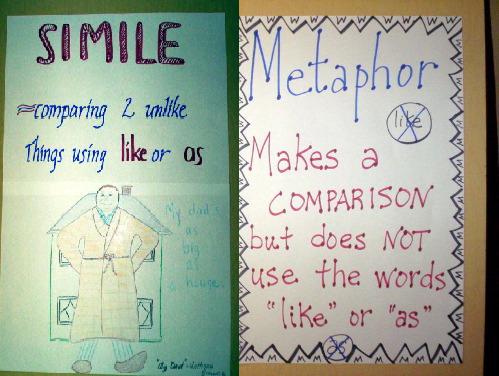 Personification is another variety of metaphor. According to Skrebnev personification is attributing human properties to lifeless object - mostly to abstract notions, such as thoughts, actions, intensions, emotions, seasons of the year. 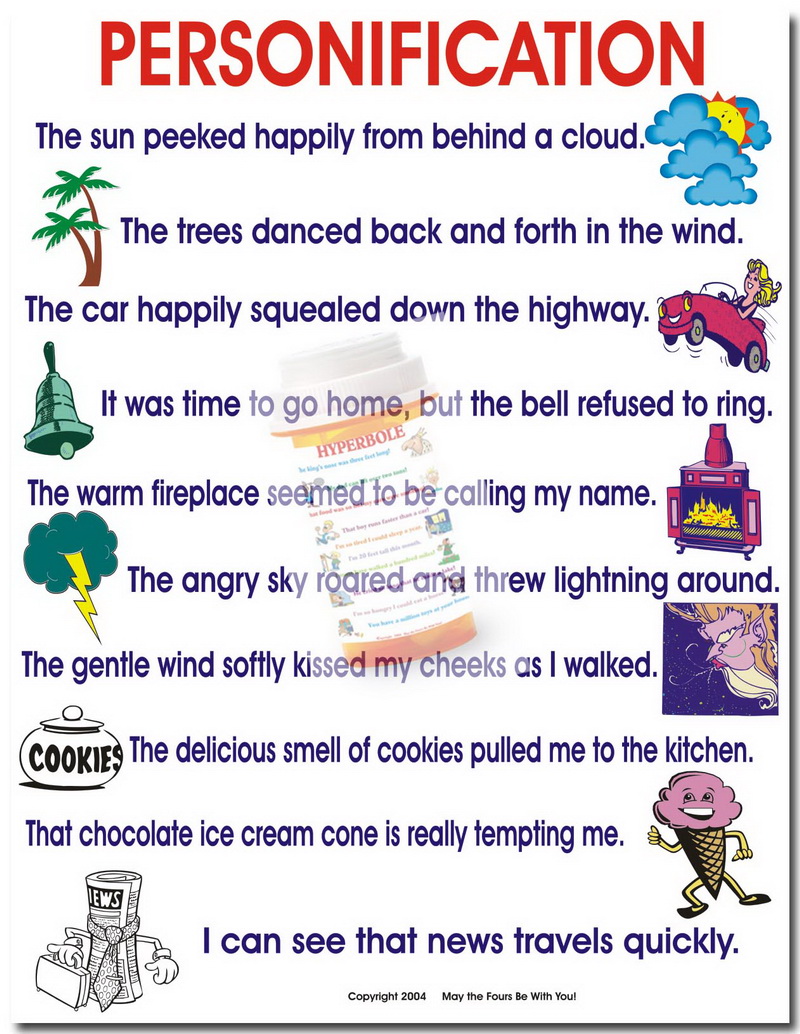 I want to offer you personification from songs ( excuse me, but I can't paste the video, I can only give the reference(((

Metonymies are frequently used in literature and in everyday speech. Metonymy - the substitution of one object by another on the basis of their common existence in reality.

I am fond of Dickens. I collect old China. This trope is of the same nature as metonymy. Antonomasia - a proper name used for a common one or vice versa.

Calling a lover Casanova, an office worker Dilbert, Elvis Presley the King, Bill Clinton the Comeback Kid, or Horace Rumpole's wife She Who Must Be Obeyed.

Semantically antonomasia can be genuine and trite.

Synecdoche is often treated as a type of metonymy. Synecdoche - the use of a part to denote the whole of vice versa.

Semantically can be genuine and trite.

All hands on deck. 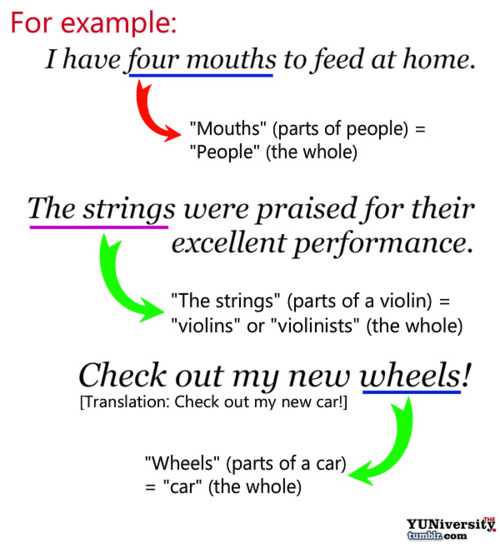 The Difference Between Metonymy and Synecdoche

Metonymy resembles and is sometimes confused with the trope of synecdoche. While likewise based on a principle of contiguity, synecdoche occurs when a part is used to represent a whole or a whole to represent a part, as when workers are referred to as 'hands' or when a national football team is signified by reference to the nation to which it belongs: 'England beat Sweden.' As way of example, the saying that 'The hand that rocks the cradle rules the world' illustrates the difference between metonymy and synecdoche. Here, 'the hand' is a synecdochic representation of the mother of whom it is a part, while 'the cradle' represents a child by close association. 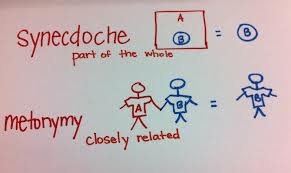 All these stylistic devices are the good way to express your emotins and fantasy.

We can see this vivid example in all literary works.

That is all, I hope everything is clear, and if anybody didn't know it, they would remember)